Summary of Events for Shaquoya Raysor

This program participant called us about purchasing a vehicle through our program.  She was referred to us by someone who is in our program that told her all about how our program works.  Although we do have a "dealer's license"... we operate differently than any dealership.  She knew this and sought us out and pursued us for an appointment.

​As a result of discussing our program with someone else who was actively progressing through it...  Shaquoya was already excited about our program.   Before contacting us, she went through our website and did her research and determined that she wanted to go through our program.  On 7/27/21 she came into our office and we spent several hours going over our program and her budget.  We showed her over 15 vehicles and she selected a 2018 VW Jetta.

After selecting and test driving that vehicle, within an hour, she was driving home.

You can click here and see the worksheet that we did with her.  You can see that we documented her expenses, which were around $900/mo and her income, which she said was $4,400/mo.  We deducted her expenses from her income, which is what you do when you do a "budget" and that left $3,500/mo.  This means that she had $3,500 at the end of each month after she paid all of her bills.  Using that figure, we suggested that she could increase her payments toward one or more assets and reduce the amount of principle she would pay.  We were able to create a 14 month plan whereby she diverted $1,000 of her $3,500 into making larger than normal payments so that she would own her 2018 VW Jetta in just over a year.... NOT 5 or 6 years.  This payment plan would have meant that she would have paid around $18,000 altogether, which would have been much less than if she were to get financing at one of those other places.

We suggest this concept to everybody that is interested in our help.  The concept is simple.  If you can afford to pay the principle faster, you SAVE MONEY.  Her complaint does NOT convey the reason why we offered her a 2018 Volkswagen Jetta with low miles for $1,000/mo....only that it was a negative thing.  We compared our plan to that of Drivetime and Carmax and she agreed that this plan was better and would save her money.  ​

WHAT REALLY HAPPENED...
Shaquoya went home and her family happened.  You can hear in the audio recordings (at the bottom of this page), that she was frustrated with her family and that she thought our program was great, but that her family would not listen to her explain what we were trying to do to help her.  So, she was forced to concede to her family's demands, in fear of what the family may do to her for trying to do something they didn't approve.  In the recordings you can hear her apologize to us for having to put us through the negativity that she was being forced to endure from her family.
This is Shaquoya right before she left our office with her 2008 Hyundai SantaFe.

Does she look like someone that was unhappy about her situation? 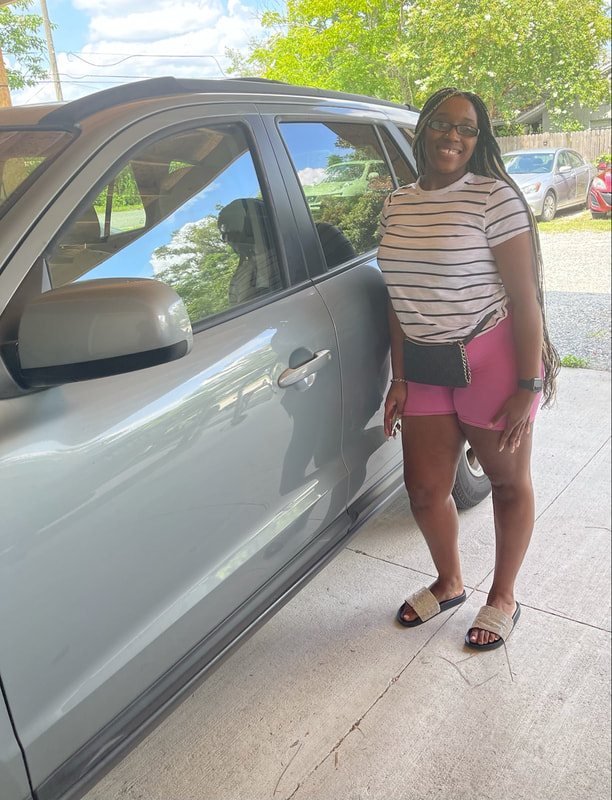 This was the vehicle that Shaquoya selected.  We didn't make her walk over to this vehicle and select it.  We showed her over 15 various vehicles, ranging in age and price and she specifically picked this one.  She didn't want any other lower priced vehicle...until she got home and her family talked her out of it.

Although Shaquoya originally selected the 2018 Volkswagen Jetta, her family made her bring it back to us and that is when we looked at lower priced vehicles that she could purchase without any payments.  This 2008 Hyundai SantaFe only had 80k miles and she loved it.

This is the audio recording of the conversation that we had with Shaquoya when she first came in to return the 2018 Volkswagen Jetta.
Notable Facts about this discussion...
It was at this point that her posture, demeanor and body language changed.  She seemed no longer tense about the situation.  She became much more excited about the prospect of leaving with a vehicle she could select that she could own with out payments SO THAT HER FAMILY would not be upset with her.

We went outside and started looking at vehicles.
This recording was done while test driving a 2014 Mitsubishi Outlander.

Notable Facts about this discussion...

If you listen to the audio recordings, you can see that Shaquoya was communicating to us that her family was suffocating her and controlling her.  "Treating her like a child".... her own words.    Everything that she wrote in that google review is the opposite of what really happened.  From the facts and evidence we have provided, it is easy to see that she is either being manipulated by her family and forced to make false statements OR she is seeking forgiveness from them for daring to go out on her own and do something without them... We can only assume this is why she wrote a fake/false google review.